Fairy Tail is arguably one of the best shonen anime of all time. Fairy Tail has everything an anime fan could ever want: powerful protagonists that manage to clutch a win, quirky characters with unique abilities, a smidge of romance and, of course, how the power of friendship prevails above all else!

RELATED: Fairy Tail: Most Disturbing Things That Happen in the Anime

Ever since Fairy Tail’s finale in 2019, though, some viewers may feel like they have a Natsu-sized hole in their hearts. Luckily, a good deal of anime are available on streaming platforms like Crunchyroll and Funimation to fill in those gaps, providing laughs and wacky misadventures in abundance.

Rave Master is an adventure anime and like Fairy Tail, has many quirky characters. Haru Glory is a sixteen-year-old boy living an ordinary life on Garage Island before accidentally fishing up Plue, a special guardian dog. Fairy Tail fans may recognize Plue as one of Lucy Heartfillia’s Celestial Spirits, as Rave Master is made by the same creator.

The first Rave Master, Shiba, then appears and tells Haru that he is the second Rave Master, and entrusts Plue and the Ten Commandments sword to him. Haru sets off on a quest to defeat the powerful Demon Card organization wreaking havoc on Garage Island, and find the missing Rave stones to ensure they don’t fall into the wrong hands. 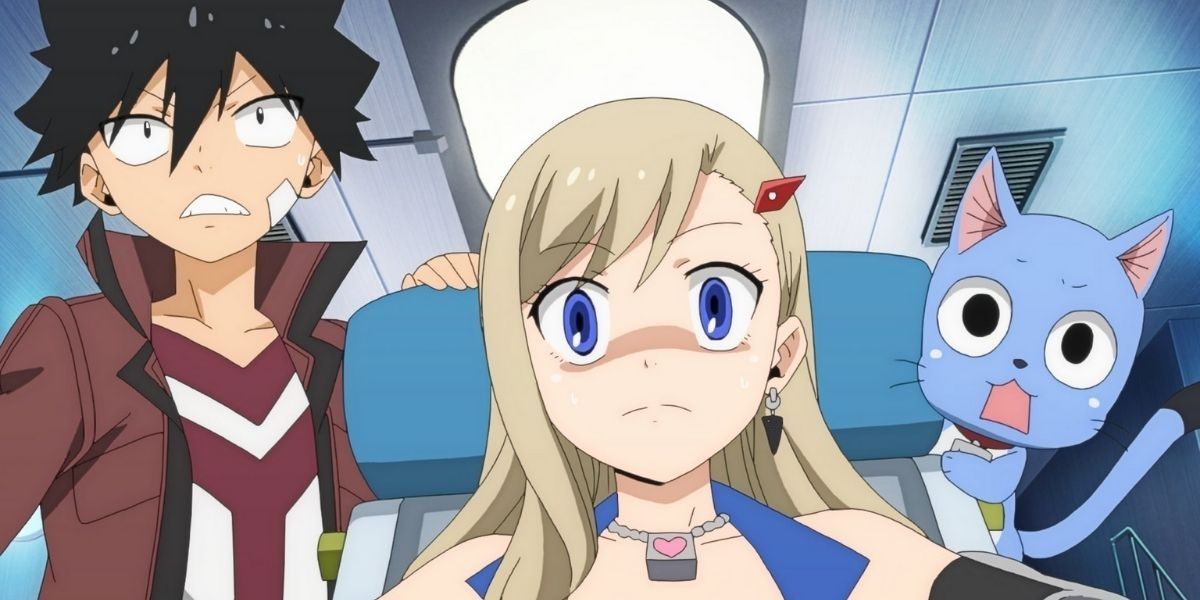 Edens Zero focuses on Rebecca Bluegarden and her robotic cat companion, Happy. Made by Fairy Tail’s creator, anime fans may recognize Happy as Natsu’s cat companion. However, in Edens Zero, he has been reimagined as an alien cat android.

Rebecca and Happy come across Shiki Granbell, the sole human on the robot-inhabited planet Granbell. The unlikely trio then set out to explore the universe in search of Mother, the fabled goddess of the universe. Shiki acquires and pilots the spaceship called Edens Zero, and so begins their interstellar adventure! Edens Zero currently has one season, with the second announced in February 2022.

Gintama features many eccentric characters and is known for its comedic value. It is set in a world where humanity is under attack by an alien race called Amantano. The series specifically focuses on the eccentric samurai freelancer Gintoki Sakta, Shinpahci Shimura and alien teenage girl Kagura with her super-strength.

Together, they run “The Anything Store” as a freelancing business, where chaos ensues. As the story progresses, this unlikely trio band together with friends and enemies alike to stop an even greater foe, the immortal Utsuro, who wants to destroy the Earth.

Black Clover is the perfect anime for fans of comedy anime, mixed with magical elements. The story revolves around two orphans named Asta and Yuno. They both decide they want the title of Wizard King and compete against each other.

At 15, Yuno received the rare four-leaf clover grimoire, while Asta received nothing. Despite his lack of magic, Asta eventually gains the five-leaf clover grimoire. Asta and Yuno embark on an adventure to excel in their magical prowess and become the next Wizard King.

Demon Slayer is an anime that has taken over the world by storm. It has tons of gore and action-packed scenes, as well as a touch of comedy, mixed together to create a recipe for an incredible shonen anime.

Demons run Japan at night, devouring anyone unfortunate enough to cross their path. Tanjiro Kamado takes on the demons of the night as he tries to restore his little sister Nezuko’s humanity. With the help of a few fellow Demon Slayers and his Breathing-fighting Techniques, he begins to cleanse the world of the evil roaming in the dark.

Like most Shonen anime, there is typically an unlikely protagonist with dreams that seem almost insurmountable. This is the case with Gon Freecss from Hunter x Hunter. He was told his entire life that both of his parents were dead, only to discover that his father is still alive and had since become an accomplished Hunter. This drives Gon’s desire to become a Hunter himself, and track his father down to follow in his footsteps.

During his Hunter’s Exam, Gon befriends three other applicants: Kurapika, Leorio, and Killua. The unlikely group embark on many adventures together, coming across a great deal of adversaries, and rising above them each time.

My Hero Academia is set in a world where so-called “quirks,” aka superpowers, are common while being “ordinary”, and Quirkless is a rarity. Some use their powers for the greater good, while others turn to the dark side. Izuku Midoriya was Quirkless with the heart of a hero, and wanted to follow in his idol, All Might’s (giant) footsteps.

All Might’s power, One-For-All, is transferable, and Midoriya becomes All Might’s prodigy as he trains at the UA High School for superheroes in training. He meets many quirky friends along the way, as the class 1-A band together against any villains they come across, working as a team.

One Piece revolves around Monkey D. Luffy, affectionately known as Luffy. He has the desire to become the next King of the Pirates by finding the hidden treasure, One Piece. Luffy also has the power of the Devil Fruit on his side, granting him special abilities.

Along with his clan of oddballs, the Straw Hat Pirates, Luffy sets sail across the world to accomplish his dream of becoming the next Pirate King.

Based on the manga of the same name, The Seven Deadly Sins focuses on the third princess of the Kingdom of Liones Elizabeth and her adventures with the Seven Deadly Sins. The group consists of seven members (obviously) – Meliodas, Ban, King, Diane, Gowther, Merlin, and Escanor, each possessing their own unique powers.

This is arguably the most similar anime to Fairy Tail. The Seven Deadly Sins group are ridiculously strong in their own ways, with their individual strengths and weaknesses. The group’s strength is unparalleled and when joined together, the power of their friendship allows them to prevail over great foes.