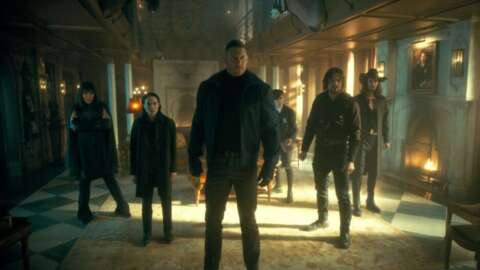 Umbrella Academy Season 3 has arrived on Netflix, and the Hargreeves family is up to their usual antics of squabbling with each other and facing down a massive, cosmic-level threat that may or may not consume all reality. You know, regular dysfunctional family stuff. This season took things bigger and, somehow, weirder than ever before–and we don’t say that lightly, considering Season 2 saw them time traveling the ’50s and facing off with a group of Swedish assassins and also a man who was actually a sentient goldfish on robotic body.

We’re going to break the whole thing down for you here, but please be warned if you haven’t finished Season 3, there are major spoilers ahead--and most of them probably won’t make a lot of sense if you’re not at least mostly caught up on the Umbrella Academy as a whole. Please proceed with caution!

We learn right off the bat that this new present day the Hargreeves family is in has been drastically changed. By interacting with their father in the past, they’ve inspired him to adopt better children–which is totally possible, after all, they weren’t the only mystery babies to be born that day back in 1989. So the Umbrellas have been replaced by the Sparrows, a well oiled fighting machine who are basically better and more successful than the Umbrellas in every way. But there’s a problem–the incongruities in time and space have created what Five calls a Kugelblitz, an anomaly that is growing larger and larger until it finally consumes all reality and destroys the universe.

So settling into their new lives isn’t an option, the Umbrellas, with the reluctant help of the Sparrows, must figure out what’s happening and stop the Kugelblitz–or just let it go. It turns out three back to back existential crises isn’t fun for anyone and the option of just allowing the universe to end is definitely on the table.

While this is happening, several other mysteries unfold with the most important revolving around Reginald Hargreeves himself, who manages to convince Klaus that he’s a changed man in this reality and wants to be a good father. This, of course, is a lie–and it turns out that Reginald has actually been (unsurprisingly) manipulating everyone in an effort to funnel seven of his children (he doesn’t particularly care if they’re Sparrows or Umbrellas) into a secret project he’s been organizing for decades within a building he constructed called the Hotel Oblivion. Within this hotel there’s a secret pocket dimension, protected by monstrous Guardians, that holds the key to creating a brand new universe. The problem is the machine that can create the universe needs seven super powered people to run it.

So, in the midst of all their personal problems (Diego and Lila may have a kid, Luthor falls in love, Five wants to retire, Viktor must deal with a figure from his past, Klaus is being manipulated by Reginald, and Allison is consumed by PTSD and grief causing her to turn her back on the family) and with the universe slowly ending, the Umbrellas and the Sparrows try to work out ways to stop the Kugelblitz. They ultimately fail, however, and are forced to turn to Reginald for possible solutions.

Reginald gives them the pitch about Hotel Oblivion being a means to save the world, but the team is unable to come to a consensus as to whether or not they should trust him. Allison, however, makes a secret bargain with him to convince the family to join him–and we’re never actually told what that bargain is or was.

We do, however, see what happens as a result. The Umbrellas (plus Sloane and Ben–the only two Sparrows who survived the Kugelblitz and/or other fights) wind up inside the dimension within Hotel Oblivion and, ultimately, suckered into powering up Hargreeves’ machine. They realize in the process that the machine will likely kill them–all while Allison watches, weighing her choices in the heat of the moment as Reginald shows his true colors. He was never intending on making a new world that would be safe for everyone and he never cared about making amends with his abused children–he just wanted to accomplish something for himself.

Allison attempts to intervene at the last moment, but it’s (possibly) too late–the machine works, as far as we can tell, though people who were acting as batteries survive. Kind of.

The Umbrellas find themselves suddenly in a memorial park dedicated to Hargreeves, within what looks like a brand new Earth–one where the Hotel Oblivion never existed. Mysteriously, however, both Sloane and Allison are missing. Allison’s absence is explained, when she’s shown having gotten her wish to be reunited with her family (though it’s not clear how that happened, or where it happened–it might be in an alternate reality or something else entirely) but Sloane seems to have just vanished. Critically, all the Umbrella’s injuries seem to have been healed, too, including Luthor’s mutated body.

The mysteries continue to build when the camera zooms out and we see that Reginald has also arrived in this new world–and seems to be, in one way or another, running things. Giant signs for Hargreeves-owned businesses plaster a crowded skyline as the man himself stands in a skyscraper observing, along with his wife–who was apparently resurrected as a result of the machine.

Confused, and ultimately burnt out on the chaos, the Umbrellas end the episode by going their separate ways. It’s not clear what they’re planning to do–or how this new world will affect them, but given Reginald’s apparent seat of power, we can assume they won’t be moving on to have peaceful, uneventful lives.