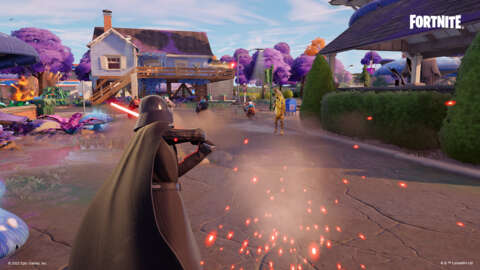 Despite only recently wrapping up a major Star Wars event last month, Fortnite is bringing some of the franchise’s popular items back into the fray this week. Not only can you get your hands on the fun (but not exactly precise) E-11 blasters once again, you’ll be able to find and wield Darth Vader’s lightsaber against your foes. However, doing so is going to require a showdown, so we’ll tell you everything you need to know about it below.

Where to find Darth Vader’s lightsaber

In order to round up Vader’s iconic red lightsaber, you’ll have to first find and take him down. The beloved villain spawns at random landing sites across the map alongside two loyal Stormtroopers. Luckily, you can see his ship flying around before you hop off the battle bus, giving you a fairly good idea of where he’s going to be. Once he’s landed, you’ll be able to see his location in the distance as a bright blue light.

As far as fighting him goes, Vader can throw his lightsaber to damage you and grab you using the force, pulling you in close to deal out the pain. He can block your shots, too, so strap in for a war of attrition. You’ll want to bring along some healing items for during and after the fight, and make sure you grab one of his Stormtrooper’s E-11 blasters to use against him so as to conserve the ammo in your other guns. Once Vader goes down, you can claim his lightsaber for yourself.

Vader’s lightsaber can be used to dish out some hefty damage to foes in melee range with rapid swings, and it can be thrown like a boomerang to unleash some medium-range aggression, too. Perhaps best of all, though, you can use it to block incoming fire for a time, giving you some much-needed defense if you’re caught in the open or attempting to push a team.

This week’s Fortnite update also includes a fairly significant nerf to reality saplings, reducing the number of higher-tier seeds that spawn on trees, as well as a Looking for Party feature for aiding players in teaming up.