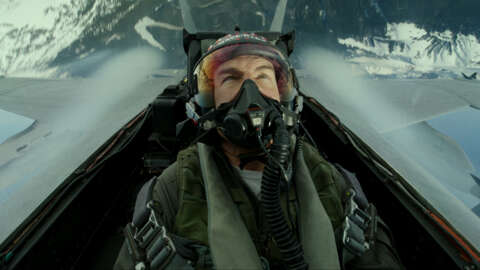 Top Gun: Maverick has been flying high at the box office–it’s Tom Cruise’s biggest opening ever, and so far has taken in $600 million–but on Monday, Paramount Pictures was sued in a copyright complaint seeking to cease all screenings, distribution, and future sequels. According to a complaint filed with the United States District Court Central District of California, the family of the man whose magazine article inspired the 1986 film exercised their right to recover the copyright to the story in 2018, taking effect in 2020.

The plaintiffs argue that Paramount did not re-acquire the film rights from Shosh and Yuval Yonay–the widow and son of Ehud Yonay–before releasing Top Gun: Maverick. “On January 24, 2020, the copyright to the Story thus reverted to the Yonays under the Copyright Act, but Paramount deliberately ignored this, thumbing its nose at the statute,” said the complaint filed in the U.S. District Court for the Central District of California.

Paramount, in a statement to Deadline, responded to the suit saying, “These claims are without merit, and we will defend ourselves vigorously.”

In 1983, California Magazine published an article by Ehud Yonay called “Top Guns,” which told the story of Navy pilots “in a remarkably vivid and cinematic fashion,” according to the lawsuit.

Marc Toberoff, the Yonay family attorney, issued a statement also arguing that the law gives authors the ability to “financially benefit from their creations and participate in some meaningful way in the fruits of their labor.” If the lawsuit moves forward, it could only mean that Paramount would still be able to distribute works derivative of Yonay’s original story–but only after obtaining the rights again.

“[Paramount] was silent,” Toberoff said. “They did not even attempt for any sum of money to relicense the rights to the story.”

According to the lawsuit, Paramount responded to a cease-and-desist letter sent by the Yonays in May only to deny that Top Gun: Maverick was “obviously derivative” of Yonay’s magazine story.