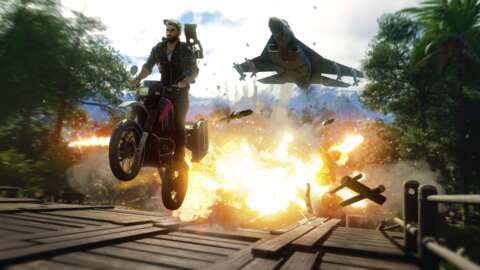 Square Enix has confirmed the existence of a new Just Cause title in development.

After selling off its entire Western portfolio to Embracer Group just last month, the status of countless of Square Enix’s properties, like the Just Cause franchise, were left up in the air. However, during a recent financial reports briefing last month, Yosuke Matsuda, the President and CEO of Square Enix, stated, “The Just Cause franchise will remain our IP, and we are at work developing a new title in the franchise.”

Square Enix provided no further information on the title, or any clarification on whether this was a new, unannounced game or referred to Just Cause: Mobile, which was discussed previously.

Though Just Cause and its developer Avalanche Studios were not part of the sale, many wondered if the publisher had any vested interest in continuing development on titles for its Western audience after the sale. While Square Enix still retained a number of the IP it had cultivated, the move was largely viewed as its divestment from the West. Shortly after, news came out that the sale was being used to develop new game studios and invest in emerging technology, including NFTs, a move which Matsuda had been signaling since at least the beginning of the year.

Elsewhere in the briefing though, Square Enix touched on the sale of its Western studios, suggesting that the move was intended as “reorientation of [Square Enix’s] portfolio].” Square Enix also seemed to reverse course on their comments about the blockchain, saying that instead of using the money from the sale to invest in it and NFTs, the proceeds would be used to “foster solid IP.”

The last mainline entry in the series to come out was 2018’s Just Cause 4. In GameSpot’s Just Cause 4 review, we called it “a short-lived blast with untapped potential.”