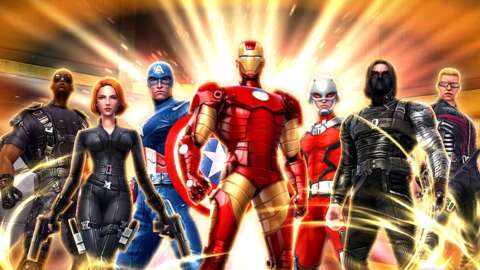 The Avengers Forever update allows players to customize and upgrade fan-favorite heroes with new uniforms for Iron Man, Black Widow, Ghost Rider (Robbie Reyes), and Blade. Players will also have the opportunity to unlock Tier-4 level status heroes that raise the max level to 80. The gear upgrade max level has been raised (+30) and max skill level unlocks have been raised to 10. A ‘2nd Potential’ skill has also been added to Tier-4 Heroes to allow them to increase the potential level to level 12. Players will be able to unlock Tier-4 under specific conditions or by consuming certain materials.

With the new update, specific heroes can be upgraded with new Tier levels and skills. Iron Man can now be upgraded to Tier-4, and Blade can now max out at Tier-3 with a new Ultimate Skill. Other heroes such as Ghost Rider (Robbie Reyes), Wasp (Nadia Van Dyne), and Nova (Sam Alexander) will have new awaken skills.

Players can fight Dormammu again in a new giant boss raid. In this fight, you’ll have the chance to collect new rewards, and compared to other giant bosses, this raid has an advanced difficulty level and can be played in single-play.

Marvel Future Fight is a free-to-play mobile game that you can download on the Apple App Store and Google Play.