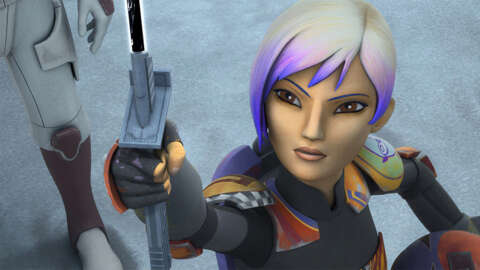 The first footage from the upcoming Disney+ series Ahsoka, which sees Rosario Dawson reprising the role she played on The Mandalorian, has debuted. The footage was shown to the crowd at Star Wars Celebration, the series has only been filming for three weeks, and it still managed to be very illuminating.

First and foremost, Dawson traveled to Celebration from the set of the show for the Mando+ panel and brought Chopper, the droid from Star Wars Rebels with her. She confirmed that Chopper does appear on the show. However, the footage also revealed two other characters from Rebels making their way onto Ahsoka. We briefly see Hera, though no further information was given about her appearance. Then, Sabine Wren, the young Mandalorian woman from the animated series, entered the story. Natasha Liu Bordizzo (The Society) will play the character, complete with her signature short hair. However, Sabine was only seen briefly from behind in the teaser video.

Bordizzo joined the panel to share a bit about her role on the show. “I feel like I’ve just been adopted into a new family,” she said. “I have never experienced anything like this. [It’s] going really well… I know how much Sabine means to everyone in this room. In watching Rebels, she’s come to mean a hell of a lot to me too.”

It remains to be seen if this footage will be made available, but for now we know for sure both Sabine and Chopper will be part of the upcoming Ahsoka series when it premieres.