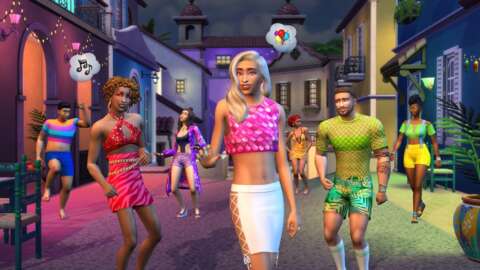 After first being announced last year, customizable pronouns are now ready to use in the English version of The Sims 4. EA announced the exciting update on its blog, writing this feature is a “step in the direction of a more inclusive experience for Simmers” and the team is “excited to see how we’ll be able to evolve the game and feature over time to support more languages.”

According to EA, this feature has been on The Sims’ team’s minds for quite some time. However, rather than implementing the feature as soon as possible, The Sims Team says it did a great deal of research into how to best implement custom pronouns. The studio reached out to two inclusivity-based organizations–the It Gets Better Project and GLAAD–and came to the conclusion that the most thorough way to be inclusive was to allow pronouns to be defined and inserted by the player.

Players can select their pronouns while in Create-A-Sim mode by selecting the part of the screen that reads, “Hello, my name and pronouns are…” Once selected, you’ll be able to switch your pronouns to they/them, she/her, he/him, or custom. If you choose the custom option, you’ll be prompted to fill out five boxes elaborating on what the subjective, objective, possessive dependent, possessive independent, and reflexive forms of the pronouns you wish to use are. If all that sounds a bit intimidating, The Sims Team says not to worry–there will be examples at the ready for players to use as a sort of template. The team also says that players who are not interested in interacting with the pronoun system will not be prompted to–their pronouns will instead default to those typically associated with the gender identity they selected.

For those interested in using this feature, you have the ability to update your Sims 4 game today and begin playing with the new and improved pronoun system. As of right now, custom pronouns are only available for the English version of the game, which EA says is due to how much research is required to properly integrate grammar rules. In addition, the team repeatedly emphasized that the system might not work perfectly, and there are limitations as to what it picks up. It urges any players who notice grammar errors or instances where the game uses incorrect pronouns to report the issue to this thread so it can work on fixing it. The Sims 4 is currently available in 18 different languages, meaning there’s a whole lot of work to be done before we see the pronoun update implemented globally.

This feature is the latest in The Sims 4’s push for greater diversity within the popular simulation series. The game recently received a DLC pack centered around more inclusive wedding ceremonies, and has continuously released free updates expanding sim’s hair types, skin tones, and cultural backgrounds since its release in 2014.